School District U-46 is preparing for the 2020-21 school year with new leaders stepping into top administrator roles. Some of these professionals have recently joined the District, or have been promoted from within U-46 to serve a new role. U-46 District and school administrators oversee schools, District-wide programs and services, collaborate with staff and teachers, and guide our families to help students achieve academic success.

“These leaders bring with them energy, passion, and a dedication to helping us meet the needs of each and every student,” said U-46 Superintendent Tony Sanders. “As we head into a school year that will demand innovation and flexibility, I am very glad to have them on our team.”

The following educators will take on new challenges and responsibilities across our schools. They have been named to positions that were left vacant due to retirements, resignations, or other opportunities within the District.

Mrs. Krystal Bush, who has worked in public education for 30 years, is the new principal of Larkin High School.

Mrs. Bush most recently served as principal of DREAM Academy High School in Elgin, an alternative educational option which encompasses 14 programs that give students an educational opportunity that maximizes their individual potential.

Prior to being promoted to principal at DREAM Academy, she served in multiple administrative roles in U-46 including associate principal at South Elgin High School, assistant principal at Liberty Elementary School in Bartlett, and dean of students at Streamwood High School. Mrs. Bush began her teaching career in 1990 as a physical education and health teacher.

Mrs. Bush believes in building strong relationships with staff, students, and families in order to be able to understand their needs and work to support them toward success.  In all of her roles, she worked to elevate student voice, develop opportunities for collaboration among staff members to share best practices, and engage the parents and community to support continuous school improvement.

Until joining U-46, Dr. Johansen was the assistant principal at Glenbard East High School, a role he had held since 2013. He served in the same school, located in Lombard in Chicago’s western suburbs, as a dean of students beginning in 2009.

Dr. Johansen began his teaching career in 2003 as a special education teacher at East Leyden High School in Franklin Park.

At Glenbard East, Dr. Johansen has led instructional support teams, coordinated and developed school schedules, led committees in passing a $35 million referendum, managed and maintained the school’s operating budget, oversaw all union support staff, and coordinated the commencement ceremony.  He cited that his greatest joy was in collaborating with colleagues across departments to provide real-world learning opportunities for students, from an incubator lab for the business department to designing a stem cell lab for biology students, as well as bringing together multiple disciplines for a food truck start-up. He strives to seek new, creative, and innovative ways to increase capacity for students.

Ms. Christine Zugel, who has served as the assistant principal at Abbott Middle School in Elgin since 2013, has transitioned to a new role as the school’s top leader.

Ms. Zugel joined U-46 in 1991 when she was hired as a language arts teacher at Kimball Middle School in Elgin.  She served in that role until 2003 when she joined the staff at Abbott Middle School as a teacher.

As assistant principal at Abbott, Ms. Zugel has worked collaboratively with teachers on implementing new safety and academic systems and procedures that will better serve students. She has handled budgeting and evaluation responsibilities as well as managing day to day building operations, and served as interim principal at Abbott starting in March 2020.

Ms. Zugel earned a Bachelor of Science degree from Ball State University, and a Master’s degree in educational administration from Aurora University. 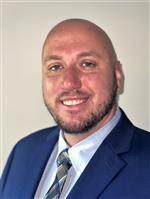 Mr. Jonathan Miquelon, a graduate of U-46’s Larkin High School, has been named the principal of Clinton Elementary School in South Elgin.

With 15 years of experience in education as a teacher and administrator, Mr. Miquelon brings a student-centered focus to his role with experience collaborating with students, families, school staff, and District leaders to best support student success.

Mr. Miquelon joined the District in 2005, initially working as a substitute teacher and teacher's assistant at South Elgin High School until serving as a social studies teacher at Elgin High School from 2008 to 2018. During his time as an EHS teacher, Mr. Miquelon served in leadership roles on several school wide committees, including the School Improvement Plan Team, as well as committees to support freshmen, standards-based grading, and the school’s website. He also designed a Positive Behavior Intervention Support (PBIS) approach for EHS.

Since 2018, Mr. Miquelon has served as the assistant principal at U-46’s Tefft Middle School in Streamwood. In addition to overseeing the middle school’s science, social studies and special education departments, he has been responsible for student discipline and behavior. Mr. Miquelon has focused on learning and implementing the best practices of Trauma-Informed Care, incorporating strategies to support students through a range of challenges and emotions. In the past year, he served on both the Dual Language Committee and the Peer Assistance Review committee.

Mr. Miquelon earned a Bachelor of Arts degree in history and a Master’s degree in educational leadership at Northern Illinois University. He attended Century Oaks Elementary and Kimball Middle School before graduating from Larkin.

Dr. Jason H. Gold has been selected as the principal of Fox Meadow Elementary School in South Elgin. Dr. Gold has worked in education for 14 years as a teacher and administrator and brings with him strong interpersonal and problem-solving skills, experience in developing and retaining staff, and a belief in the importance of supporting student success via collaboration with families, school staff, and District leaders.

Dr. Gold most recently served as the principal of Komarek Elementary School District 94 in the Cook County suburb of North Riverside, a position he held from 2016 to the end of the 2020 school year.  At Komark Elementary, a one-school district with more than 520 students, Dr. Gold has developed and implemented school-wide policies and procedures regarding accelerated placement, homework and grading, and more. He has led internal and external communications and engagement activities for staff and families, from book clubs to newsletters, as well as operational work, from meal distribution and drive-by graduation procedures during the COVID-19 pandemic. He supports implementation of PBIS and discipline support measures and co-developed and implemented the school’s master schedule.

Ms. Andrea Gaitán-Bustos brings a bilingual, bicultural, and student-centered focus to her new role as principal of Sunnydale Elementary School in Streamwood.

Ms. Gaitan-Bustos joined U-46 in 2008, working as a 4th grade bilingual teacher at Laurel Hill Elementary in Hanover Park and later as a classroom teacher at Lincoln Elementary in Hoffman Estates and Hilltop Elementary in Elgin, served on the School Improvement Planning teams at all three schools.

Ms. Gaitán-Bustos most recently served for the last three years as the assistant principal at Coleman Elementary in Elgin. She has also worked as a bilingual instructional coach.

She has a depth of professional experiences collaborating with students, families, school staff, and district leaders to support student success.  Ms. Gaitan-Bustos is invested in engaging all families to feel welcomed and to be a part of school activities.

Ms. Gaitán-Bustos earned a Bachelor of Arts degree in language instruction at LaSalle University in Bogota, Colombia, a Master’s degree in teaching at Aurora University, and another Master’s degree in administration at Northern Illinois University. She also participated in the district’s Aspiring Administrators Program. She is also a recipient of a Special Recognition Award from the Illinois Legislative Latino Caucus Foundation.