ELGIN – School District U-46 is celebrating its valued partnership with the Kane County Teachers Credit Union by awarding it with the Elgin Area Chamber of Commerce’s Business Partner of the Year Award for 2017-18. The District will recognize the credit union Thursday during the Chamber’s Annual Meeting and High Fives Awards Luncheon.

“The KCT Credit Union was founded by educators, and even though its membership has broadened greatly over the years, the organization remains devoted to supporting education and its employees to giving of their time and resources to benefit children,” said U-46 CEO Tony Sanders. “We are proud to call the KCT Credit Union a true community partner that supports education not only in our District but also across the entire Fox Valley.”

Chartered in 1937, KCT Credit Union was formed through the efforts of  Martha Black, a teacher in the then-Elgin Public Schools District, and E. Earl McCoy, then the Kane County Superintendent of Schools. 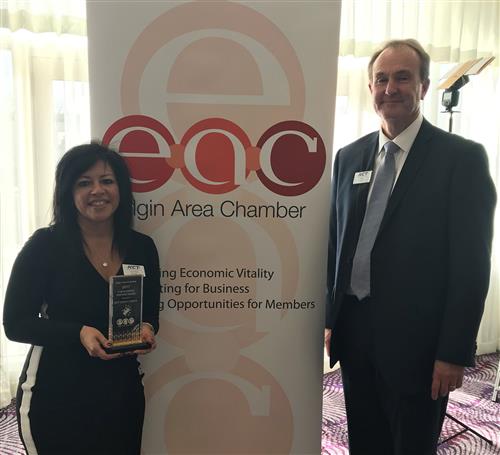 The credit union has worked closely with U-46 staff on a number of projects over the years, including co-sponsoring the New Teacher Orientation that welcomes nearly 250 teachers to the District annually. The credit union has also contributed to the annual Superintendent’s Scholarship program and sponsored the AVID Path Training Financial Seminar & Luncheon for more than 300 educators.

The credit union significantly contributes to the Alignment Collaborative for Education, which supports the District’s strategic plan, by serving as a member of ACE’s Operating Board and the educational pathways A-Team, offering valuable insight from an external partner viewpoint. The credit union staff, specifically Yvonne Irving, vice president community business development, donates numerous hours soliciting businesses and vendors to be a part of the District’s annual curriculum and career expo, called Explore.

Karla Jimenez, Coordinator of Family & Community Engagement, will present Irving and the KCT Credit Union CEO Mike Lee with the award Thursday during the Chamber’s Annual Awards Luncheon at the Grand Victoria Casino in Elgin. The event starts at 11:30 a.m.

“KCT is both honored and humbled to receive such recognition from a school district that does so much for our community,” said Lee. “We feel privileged to have the opportunity to serve others and to live up to our motto of ‘Building Stronger Communities Together.’ Thank you School District U-46 for this award.”

KCT Credit Union is a member-owned, not-for-profit financial institution. Membership in the credit union is open to anyone who works for one of its Select Employee Groups (including a number of private schools, community colleges and districts including U-46) or lives in one of seven counties, including Kane, DuPage and western parts of Cook.