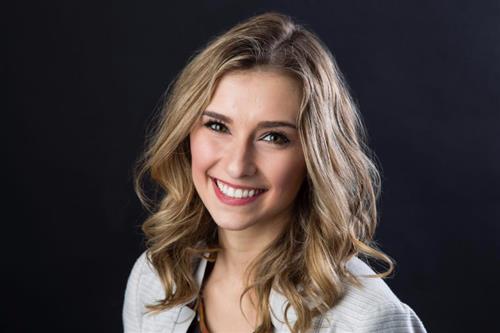 The bright lights have gone on for “Living Local,” an hourlong lifestyles program on Fox affiliate KXRM in Colorado Springs, Colorado. And there at the anchor desk, right in the middle of things, is Mia Atkins.

After two weeks of dry runs and rehearsals, the show has been going out, live, to viewers for a month and a half. Atkins, a graduate of South Elgin High School’s Broadcast Education and Communication Network Academy, describes it as “action-packed.” Guests have included the local Humane Society with a dog they’re fostering, a chef from the “Top Chef” program, a member of the Harlem Globetrotters, a Paralympian on the set to discuss his progress from a brain injury to athletic competition and even that fates-defying staple of live-TV programming, a wild animal in the studio – in this instance, an owl.

“We’ve had so many awesome people in the community come on and talk about their passions – it’s awesome,” says Atkins, a former full-time reporter during college for “Cronkite News-Arizona PBS” and a veteran of “Your Life Arizona” on CBS affiliate KTVK in Phoenix.

Kicking off a live program is not without its challenges, Atkins allows. “We started this show from scratch,” she says, “so, of course, there are going to be bumps in the road, but I’m really excited to see how the show progresses over the next couple of months.”

Atkins credits her years in the Academy with getting her focused on what would become her life’s work.

“I don’t think I would have realized that this is my passion without the Beacon Academy,” she says. “The first time I sat at the anchor desk, I just knew I wanted to do this. I feel it definitely set me ahead.”

The small, close-knit group of students and teachers she worked with at South Elgin High School was instrumental in setting her up for Arizona State University, where she earned a bachelor’s degree in journalism and mass communications with a focus on broadcast journalism, and her life beyond.

“I can’t even imagine having any regrets,” Atkins says. “I made great friends, great contacts. … My teachers were passionate. I wouldn’t change it for anything.”